Prime Minister will be on a trip to China from June 19 to 24. 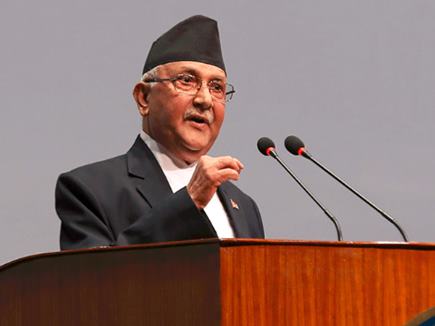 [Kathmandu]: Both countries will sign several agreements during Nepal's Nepalese Prime Minister KP Sharma Oli's five-day visit to China. These agreements will include the Energy Cooperation and the Railway Line Construction Agreement between Kairung in Tibet and the capital Kathmandu.
A former prime minister from Nepal Prime Minister KP Sharma Oli, who is going on a tour to China, has asked Beijing to lift the controversial issue of the Lipu article between India-Nepal-China in front of Beijing. Before the five-day visit to China starting on Tuesday, the Prime Minister interacted with the former Prime Ministers. Prime Minister will be on a trip to China from June 19 to 24.
Lipu article is the last point on the Nepalese border that looks with Indo-China. It is considered the ancient route of the movement of traders and pilgrims between Nepal and Tibet.
Oli, for the first time on Saturday, talked to former Prime Minister of India Sher Bahadur Deuba, Pushpa Kamal Dahal, Madhav Kumar Nepal, Halle Nath Khan and Baburam Bhattarai. Justice Power Nepal Coordinator Bhattarai presented 10-point suggestions before the Prime Minister.
According to the Kathmandu Post, Bhattarai has urged to raise the Lipu article issue from Oli. It has agreed to develop it as transit point between the two countries. With the Chinese to open the border on the border, to deal with the land by swapping the boundary dispute, the Belt and Road Initiative framework and financial assistance under the Asian Infrastructure and Investment Bank, and to build railway from the border town Kerung to Kathmandu, he It has also been asked to get a grant from.
During the meeting, the former Prime Ministers asked to present projects from Oli and ask for help from China. This will give Nepal the benefit of accelerated development of its powerful neighbor. They also suggested to attract Chinese investors. Oli gave him the confidence of taking Nepal-China relations to a new height.
CONTINUE READING
# KP Sharma Oli
# China
# Nepal
# Lipu Lekh
# China Visit
# Tibet
# Beijing
# Pushpa Kamal Dahal
INTERNATIONAL REPORT
VISHAL SINGH
INTERNATIONAL REPORT
200 pilgrims stranded in Kailash Mansarovar due to bad weather
Dalai Lama and the Chinese
A look into China and Xi Jinping!
China made a distance from its ambassador's statement, said- Increase confidence by mutual talks, Indo-Pak
By 2022, China will bring the world's largest amphibius aircraft 'AG600'
Top Chinese Dishes one must try
All you need to know about the Great Wall of China
Parmanu : The Story You Need
Sensex down 90 points to open at 35450
Walmart- Flipkart deal: Why Indian Startups are acquired easily?
How Did Chinese Food Come to India?
To get help from the IMF, Pakistan will have to take the decision till September
Wanna make Animation as a career in USA ? You are on write place. See the article below
A Recap of 2018
How to add a watermark in Microsoft Word
UNION BUDGET 2018 : NO RELIEF FOR THE MIDDLE-CLASS
Sharif's problems are increasing, one more member of the family declared fugitive
NewsAndStory
Subscribe to get latest update
Subscription is completely free