What is Transfer Earning in Economics?

Here, we understand the concept of transfer earning in economics with example. 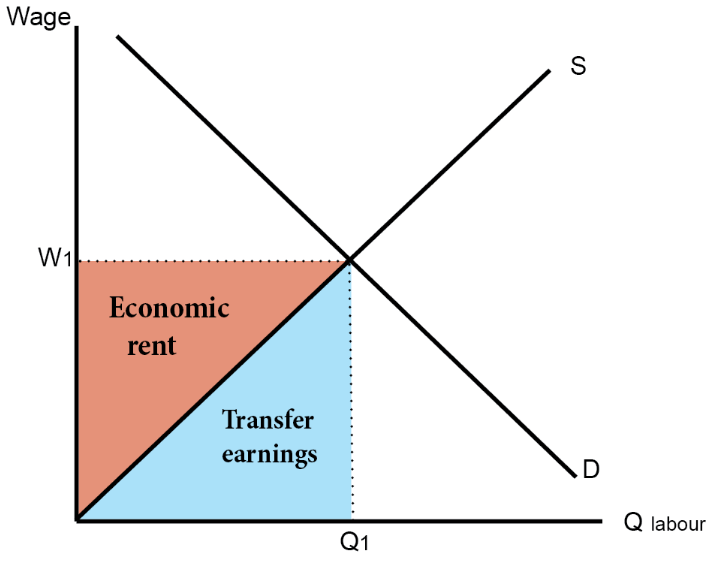 Transfer earning of a factor of production refers to its earning in its next best alternative occupation. In other words, minimum income a worker needs in order to supply their labour.
Now we will discuss the concept of transfer earning in detail with example:
Every factor of production has its minimum supply price which has to be paid to it if it is to be engaged in any productive work or undertaking.
If the reward which a particular factor of production gets in an occupation is less than its minimum supply price, it will not be available for productive use. In that case, it will tend to move towards other occupations where the reward is equal to its minimum supply price. It clearly indicates that the concept of minimum supply price is closely related to the concept of transfer earnings. We know that factors of production can be put to alternative uses. The transfer earnings of a factor of production is the minimum price which has to be paid to induce that factor to remain in its present occupation, and this price must be equal to what it can command in other alternative occupations.
We understand concept with the help of example:
Suppose if a worker can earn Rs. 5000 per month in another factory and if he is to be retained in his present occupation, the owner must pay him atleast Rs. 5000 per month or else he will move to another factory. Here, the transfer earnings of labour in this case is Rs. 5000 per month. According to modern writers, the excess of income which a unit of a factor of production gets over and above its transfer earning is rent. As shown in above case, for example, as a result of the increase in demand for labour and its relative scarcity, the owner of the factory has to pay Rs. 5500 per month to the workers, then Rs. 5000 per month will be transfer earnings and Rs. 500 per month will be known as rent earned by labour.
Rent, is an excess of income earned by a factor over its transfer earnings. It clearly indicates that such an excess of income over the transfer earnings can be earned not only by land but by all factors of production. According to modern writers, rent is not a peculiarity of land alone, it accrues to other factors of production also.
CONTINUE READING
Meaning of Transfer Earning
Factor of production refers to earning in next best alternative occupation
Supply price
Modern Theory of Rent - Transfer earning
Kinnari
Tech writer at NewsandStory
Total 1677 views
What are the Limitations of the Concept of Opportunity Cost?
What is Perfect Competition in Economics?
FACTOR SUPPLY
Meaning of Quasi-Rent in Economic Theory
Basic Economic Problems of an Economy
What is Opportunity Cost?
What is Differentiate between personal distribution and Functional distribution of income?
Why is Bitcoin better than money?
Why a firm under monopolistic competition facing problems?
Limitations of Marginal Productivity Theory of Distribution
Importance of time element in the process of price determination under perfect competition
Applications freezing issue in windows 10
HOW TO FILE TAX RETURN IN INDIA?
Highest paid freelance jobs
The demerits of using PayPal
How to Download a Backup Archive of All Your Gmail Google Data?
Top 5 Most Powerful Characters of the MCU
NewsAndStory
Subscribe to get latest update
Subscription is completely free