What is Monopolistic Exploitation and How to remove it?

Here, we understand the concept of Monopolistic Exploitation and How to remove it in detail with figure. 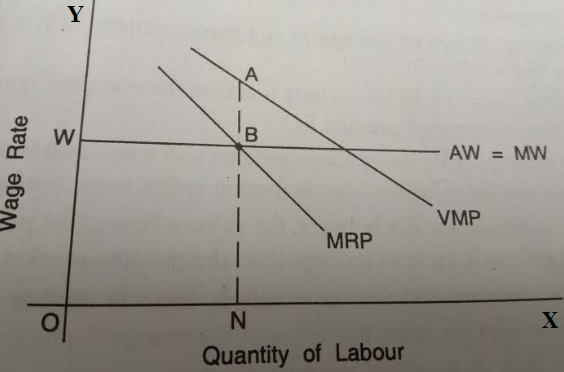 As shown in above figure, average wage and marginal wage (AW = MW) shown by horizontal line equal to wage rate OW. At this wage rate ON quantity of labour is employed.
Wage rate OW or BN is equal to marginal revenue product of labour but less than value of marginal product by AB which is the magnitude of exploitation of labour.
How to remove exploitation?
Exploitation of labour can be removed by two agencies that is
It may be noted that monopolistic exploitation of labour arises from the monopoly power of the employer, it cannot be removed through raising wage rates either by the Government or by the trade unions.
For eg- This both agencies succeed in compelling the employers to pay high wages, they can counter react by employing smaller number of workers to equate the new high wage rate with the marginal revenue product of labour.
CONTINUE READING
What is Monopolistic Exploitation?
Perfect Competition
Product Market
Factor Market
Horizontal Demand Curve
Perfectly elastic in nature
Marginal Revenue.
Exploitation of Labour - Monopolistic Exploitation.
Kinnari
Tech writer at NewsandStory
Demand curve faced by a firm under Monopolistic Competition
WAGE DETERMINATION UNDER MONOPOLY
Average Revenue and Marginal Revenue under Perfect Competition
What are the Assumptions of Marginal productivity Theory?
Profitability of Price Discrimination
CHARACTERISTICS OF MONOPOLY
Monopsonistic Exploitation
Exploitation of Labour
Differences between Perfect Competition and Monopoly
Short run supply curve of the industry under perfect competition
Main Constraints of the Cartel in Collusive Oligopoly
Looping in #C : Do-while loops and their uses in programs (module 22)
Che Guevara: The Motorcycle Diaries
What is Printer and its kinds?
American chess genius Bobby Fischer who won the love of the world
How to add Audio in HTML?
How to add HTML Tables?
NewsAndStory
Subscribe to get latest update
Subscription is completely free