What is Average Variable Cost Curve in Modern theory of Costs?

Here, we understand what is average variable cost curve in modern theory different from traditional theory of costs in detail. 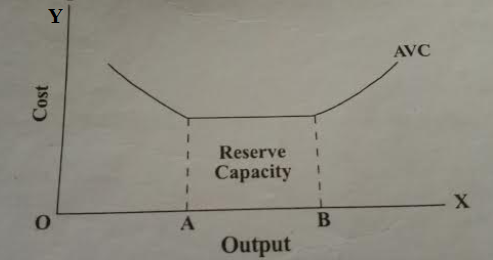 As shown in above figure, Average Variable Cost (AVC) curve has a flat stretch over a certain range of output that is (A to B) due to reserve capacity of the firm. It clearly shows that, upto point A, average variable cost falls with the increase in output and beyond point B, it rises with the increase in output.
As we noted in the traditional theory, it is assumed that a firm's choice of the plant is guided by the objective of cost minimisation today. It means, the firm will have no reserve capacity. It will have only excess capacity.
But, according to Modern theory of costs, reserve capacity is planned by the firm and it does not cause any increase in the average variable cost, though in practice, it means that the utilisation of plant will be at an output level closer to point B.
CONTINUE READING
What is Average Variable Cost Curve in Modern theory of Costs?
Traditional theory
What is Variable Cost?
Reserve capacity planned by a firm
Average variable cost curve has a saucer type shape.
Modern theory of Costs - Average Variable Cost Curve.
Kinnari
Tech writer at NewsandStory
What is Average Fixed Cost Curve in Modern theory of Costs?
Nature of Long Run Average Cost Curves (LAC)
Short run supply curve of the industry under perfect competition
Equilibrium of the firm under Monopoly
What are Variable Costs in Economics?
Why Sometimes production is continued even with loss?
What is Total costs in Economics?
Wastes of Monopolistic Competition
What are the Characteristics and Types of Production Function in Economics?
Nature of Long Run Marginal Cost Curve
What is Expansion Path in Economics?
How to customize sound of message for a specific contact in WhatsApp for iPhone?
What is HTML URL?
Read only memory : PROM and EPROM (module 33)
Some upcoming smartphones that will release in 2019
Top Android Games in 2018
How to apply for Permanent Driving License in India?
NewsAndStory
Subscribe to get latest update
Subscription is completely free