To get help from the IMF, Pakistan will have to take the decision till September

Asad Umar says that the government is considering various options to emerge from the balance of payment crisis. 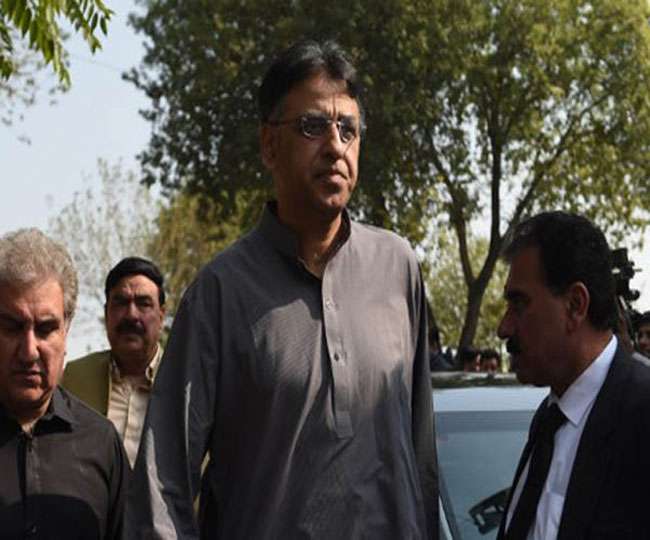 [Islamabad]: Pakistan's new finance minister Asad Umar says that the government is considering different options to emerge from the balance of payment crisis. The Finance Minister said on Tuesday that Pakistan will have to decide till the end of September whether it will seek the help of International Monetary Fund (IMF) to bring its economy back on track. Let us know that Pakistan is going through an economic crisis and the balance-payment is facing the crisis.
Umar said that by the end of September we have to make our decision. This statement by the Finance Minister of Pakistan is in the U.S. Has come after the fear that Pakistan could use any bailout of the IMF to repay the loan to China.
Significantly, Pakistan is constantly under the burden of debt due to its deteriorating economic situation. Pakistan has taken loans from many countries and organizations, but how will he repay this loan, he does not have any solutions. In such a situation, the condition of Pakistan is getting worse every day and it is being dumped in debt of many countries and organizations.
According to a newspaper published in a Pakistani newspaper last month, Pakistan's foreign exchange declined to $ 9.66 billion, which was $ 16.4 billion in May 2017. However, compared to 2017, Pakistan's foreign exchange reserves were $ 18.1 billion by April 2016. With this debt, Pakistan has taken a loan of more than $ 5 billion in this financial year from Pakistan. In the first 10 months of this financial year, China has given a $ 1.5 billion loan to Pakistan, according to documents from Pakistan's Finance Ministry. At the same time, Pakistan has borrowed $ 2.9 billion from several other commercial banks and most of them are from China.
CONTINUE READING
# pakistan
# pakistan imf
# pakistan foreign exchange
# Pakistan economy
# Pakistan Currency
# pakistan chinese loans
# pakistan bailout
International Report
Vishal Singh
International Report
Total 1022 views
China made a distance from its ambassador's statement, said- Increase confidence by mutual talks, Indo-Pak
Indus Water Treaty between India and Pakistan
The Kashmir conflict in a Laymanâ€™s language
Protesters attack East Pakistan Prime Minister Sharif's flat in London
Sharif's problems are increasing, one more member of the family declared fugitive
Why is The Taj Mahal a forever symbol of love?
Gun Culture in the USA
Article 35-A: Case-hearing in the Supreme Court, Raised political activism in Jammu
India needs to tighten monetary policy to combat inflation: IMF
Best Ways to transfer money without a processing fee
A basic introduction to forex trading
What is Meaning of Production Function in Economics?
What to do with compatibility error 0x800F0923 during installation?
What is Workbook (File) in Excel?
How to convert HTML to PDF Using DocRaptor?
One Plus guarantee it's three year updates to OP Users
Digital payment system
NewsAndStory
Subscribe to get latest update
Subscription is completely free