Soon, 70 rupees can be 1 dollar, know why it is lean rupee

Rupee is breaking new records and it has now reached the lowest level of 18 months. 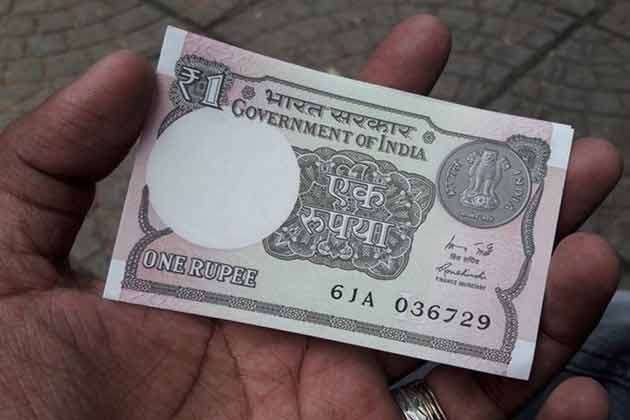 [New Delhi]: Thursday Rupee is recovering 12 paise to open at 68.30 On Wednesday, the rupee had dropped 38 paise to close at 68.42 against the dollar, which was the lowest level of 18 months on the rupee. Earlier, the rupee closed at 68.65 per dollar on November 29, 2016. Let us know for information that on May 15, 2018, the rupee had crossed 68. On this day, the rupee fell 56 paise to 68.07 on 67.79. This was a low level of 16 months of rupee. Experts believe that rupee can surpass the level of 70 against the dollar during the April quarter.
Due to this weakness in rupee: Kedia Commodity chief Ajay Kedia said that there are several major reasons behind the recent weaknesses of the rupees which are the following ...
Deficit of the government: The government wants to control fiscal deficit up to 3.3 per cent of GDP in the current fiscal year. In the last financial year, the fiscal deficit was 3.5 percent of GDP. Due to the increased trade deficit and increasing the scope of the current account deficit, the effect of rupee on health is also seen. A recent report said that the rising prices of crude are worrisome for the current account deficit (CAD) and can take it up to 2.5 percent in the proportion of GDP.
Dollar strengthening: If the dollar is strong, obviously the rupee will weaken. For the past few days, the dollar index is getting stronger. The dollar index is currently looking to accelerate. It is believed that it can be seen even further in this.
Continuing to rise in crude prices: Crude prices are not taking the name of fasting. Brent Crude recently touched the $ 80 barrel level. It is still doing business around $ 80 a barrel. Increased crude prices have also diluted the condition of the rupee.
Shortening of GST collections in the months before April: If GST is left out in the month of April, then GST collection has been very low in the last few months, it has also worked to weaken the rupee. During the first month of April, the figure of GST collection crossed the 1 lakh crore mark.
Signs of hike in interest rates from the Fed Reserve: Ajay Kedia said that the target of 2% inflation in the US has been completed. In such a situation, the Fed reserves can increase interest rates more than three times. If this happens, the dollar index will get stronger.
Indian rupee can break up till?
Ajay Kedia said that if talk of May month only, the low level of rupee can be at 67.20 and the highest level of 69.40 this month, i.e. the possibility of crossing Rs 70 level this month is less. However, if the matter is talked of in the April quarter, the lower level of the rupee could be 66.40 and the highest level of 70.20.
Why is the rupee weak?
In your mind, there will often be a question that why the rupee weakens? The easier this question is, the easier it is to answer. Dr Ravi Singh, Head Research, Broking Firm, Karvy Commodity, said that there are many reasons for this.
FIIs to draw money from Indian markets: Foreign investors who are also called FIIs when removing their rupees from the Indian market, the value of the rupee weakens against the dollar. In the past one month, foreign investors pulled out more than $ 2 billion from the Indian stock market. For this reason weakness in rupee continues.
Prices of crude prices: India relies on import of 80% of its crude oil requirement. In such a situation, when crude prices will increase, India will have to spend more than its forex reserves. That is, India will have less reserve reserves and this is the main reason for rupee weakness. If the dollar is strong then the country's exports are also affected.
Other reasons for the current weakness of the rupee: If there are other reasons for the current weakness of the rupee, then the situation of trade war between China and the US can be considered. However, now both countries have shown softness in relation to trade war. But due to the growing geo-political tension due to other Iran, Venezuela and other countries, it is also working to weaken the position of the rupee. At the same time, the temporary government in the Karnataka assembly elections is also weakening the position of the rupee. When BJP was looking at forming the government, the rupee was strengthened even then.
# Rupee
# dollar
# Crude price
BUSINESS REPORT
VISHAL SINGH
BUSINESS REPORT
Total 496 views
How to Fast Startup re-enabled after installing Windows 10 version 1803?
How to Activate Login Security on Facebook?
How to fix networking problems on Windows 10 Update?
How to Power 2 Speakers with a 1 Channel Amplifier?
Introduction to control statements - Branching and Looping in #C (module 18)
200 pilgrims stranded in Kailash Mansarovar due to bad weather
CBSE Class 12 Results: Analysis
What is Disk Defragmenter in Windows Operating System?
Chichen Itza: The glorious historical city
Looping in #C : Do-while loops and their uses in programs (module 22)
f
t
g
r