[Sochi]: Russia's President Vladimir Putin met Syrian President Bashar al-Assad on Thursday. During this, he congratulated the Assad government for the success of the rebels. Putin said, the success of the Assad government's army against rebels has made reconciliation in Syria and an atmosphere of political process on a large scale.
Russian President House Kremlin spokesman Dmitry Pascov told the media that there was a detailed discussion between the two leaders. Putin and Assad had met in December last year in the Syrian coastal city of Lattakia. 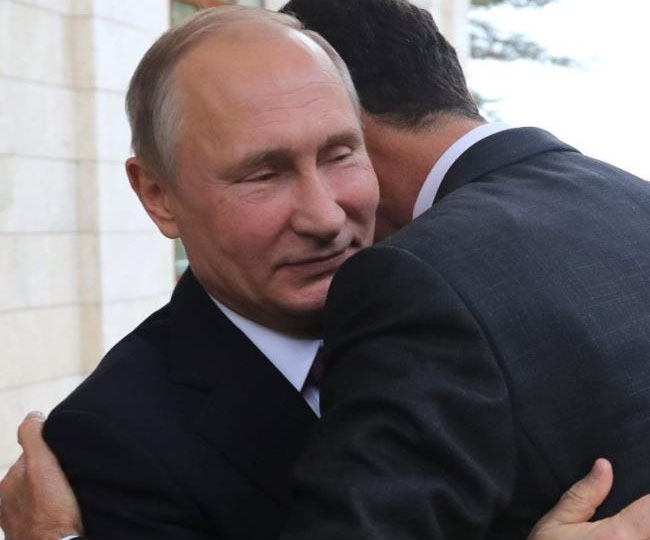 In a statement released by the Kremlin, Putin said, "Foreign military forces will leave the Syrian territory as soon as the political process begins."
Although it has not been clarified what does he mean by foreign powers? Russia began interfering in Syria's civil war in September 2015. Russian intervention has changed the attitude of air in Syria and Assad managed to save its power.
# Syria
# Russia
# Vladimir Putin
# world-politics
# Syria President Asad
INTERNATIONAL REPORT
VISHAL SINGH
INTERNATIONAL REPORT
Total 466 views
North Korea's nuclear test of 10 times more powerful than a bomb dropped on Hiroshima
H-1B Visa Processing begins!
Low level language and it's type : Machine level language (Module 40)
Why Siri cant beat Google
Neymar to go To REAL MADRID??( Learn the truth)
How to Insert Symbols in Word document?
Update isn't applicable to your device ,How to fix it?
What is meant by Contractual Rent?
In Bangladesh, deliberately considering the death penalty in cases of road accidents
Being extremely online can only bring you pain. Check why ?
What is Ms-Excel?
How to keep Acidity under Control?
f
t
g
r