Members of the National Committee of the Palestinians in Gaza have decided to perform near the Israeli border beside the Gaza Strip. 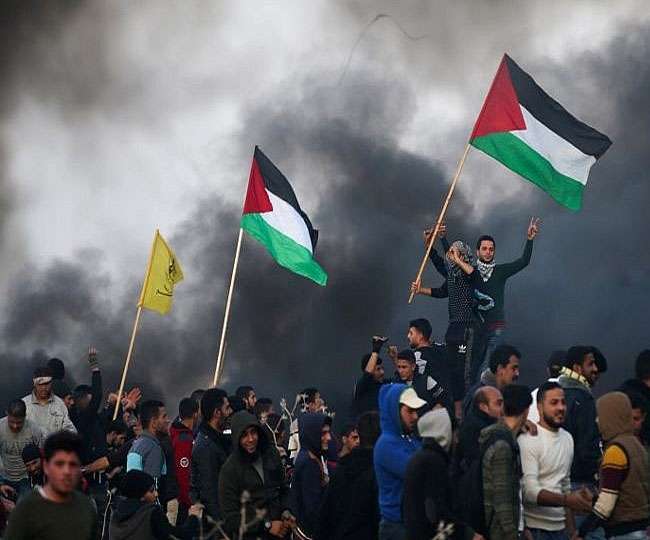 West Gaza (IANS): Palestinian citizens called for the biggest anti-Zionist protests in Gaza on Sunday. On Monday, the Palestinian citizens have decided to organize anti-Israel protests at the western edge of Gaza Strip.
Monday is Israel's 70th Independence Day. On this occasion the Palestinians organized this exhibition. This day comes a day before Nakba Day of Palestine. It is being said that this protest is being done in protest against the move of the United States to move the Embassy of Israel.
Significantly, on today, US President Donald Trump is going to relocate to Israeli embassy Rhode Aviv, who was announced by Trump in December last year. Members of the National Committee of the Palestinians in Gaza have decided to perform near the Israeli border beside the Gaza Strip.
On Sunday afternoon, traffic was stopped for five minutes to announce this huge performance near Gaza. Let us tell you that the start of this six-week protest started on 30th March, which is to end on May 15. The National Committee said that this is an important day for protesting on Monday.
To prevent 12 years of blockade by Israel in the Gaza Strip, the Palestinians have invited less than one lakh participants to participate in the demonstration. They say that they will not go away from achieving their goals. "For this Gaza residents have urged public institutions, universities, as well as other daily services to be closed.
# world-international
# Palestin
# anti-Israel protests
# anti-Israel protests in Gaza
# Gaza
# West Bank
INTERNATIONAL REPORT
VISHAL SINGH
INTERNATIONAL REPORT
Total 422 views
The fascinating legend behind Kumbh Mela
How to resolve error 0x80070522 while installing April Update?
UAAP: De la Salle University wins the Volleyball Cup!
Your chrome browser is having a problem? Want Reset Browser Settings?
Ratan Tata in Aeronautic and Aviation Industry
How to Add Subtitles to a Movie on VLC?
Branching in #C : concept of If-else and their uses in programs (part 2) (module-19)
Uruguay sends Ronaldo led Portugal Home!
Thiruvananthapuram Railway Station gets ISO certification
How to Convert WhatsApp Conversation Into TXT Format for reading Conversation in PC?
f
t
g
r