Walmart Inc.'s President and CEO Doug McMillan says that at the moment, their focus will be on Flipkart. 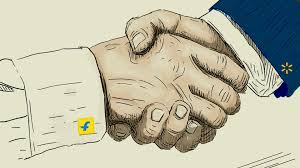 After investing $ 16 billion (about Rs 1.05 lakh crore) on Flipkart's acquisition, Walmart, the world's largest retailer, would like to invest more in India on future prospects in future. Although Walmart Inc.'s President and CEO Doug McMillan says that at the moment, his focus will be on Flipkart. As far as the tax liability is settled after the deal, Macmillan says that the tax officials will work closely with the authorities and ensure that all rules are followed.
On Wednesday, Wal-Mart, the world's richest retailer, had announced to buy 77 percent stake in Flipkart, the largest Indian company in the e-commerce market. After entering the Indian e-commerce market through Flipkart, Wal-Mart will directly compete with Amazon's American company. Even in the American market there is strong competition from Amazon.
Wal-Mart
Flipkart
Amazon's American Company
Bussiness
VISHAL SINGH
Bussiness Reprt
Total 407 views
Priyanka chopra's show Quantico has been cancelled.
What is svg Element in HTML graphics?
Essentials for On-page SEO
Increased confidence in the BJP about the 2019 elections, Shah said: 'Modi will be united with the people'
Manipal-TPG jointly increased its revised proposal
Learn how to use the Zoom Controls and its use.
What are the Limitations of the Concept of Opportunity Cost?
How to fix networking problems on Windows 10 Update?
After the tone of Nawaz, hearing of the Mumbai terrorist attack in Pakistan court is fast.
Some upcoming smartphones that will release in 2019
f
t
g
r