Japan: 155 deaths so far from the flood, rescue workers searching for victims from home

About 75 thousand soldiers and firemen have been deployed in the rescue work in Japan. Seven hundred helicopters have been installed in this work. 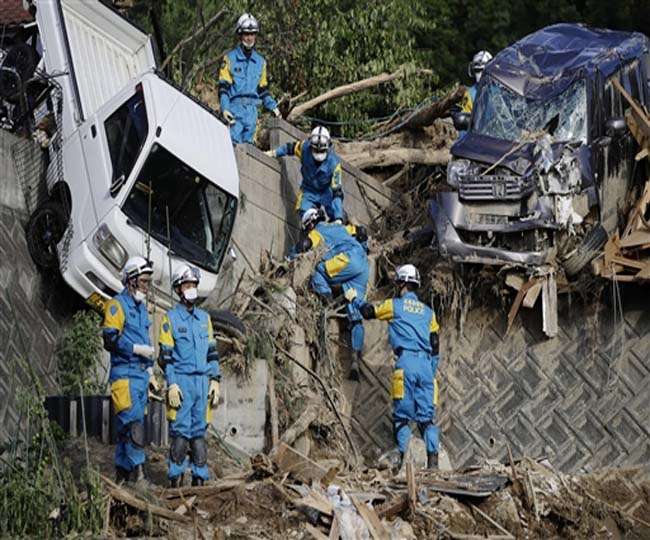 [Kurashiki]: The number of people killed in flood-hit and landslide followed by heavy rains in the southwestern part of Japan has risen to 155. Even now dozens of people are trapped in the flood. Rescuers are trying to get people safe from going home. About 75 thousand soldiers and firemen have been deployed in rescue work. Seven hundred helicopters have been installed in this work.
Electricity has been restored in hundreds of homes but due to the lack of drinking water, it has not yet been fully dealt with. After the rain stopped, the temperature reached 33 degree Celsius. In this way about two lakh people are forced to live under the scorching sun without water. After landing the water, there is mud accumulation in roads and houses. Many buildings have collapsed. Meanwhile, the mother of Kurashiki, situated between the two rivers, has become submerged due to breaking the district dam. Most of the deaths have occurred in Hiroshima due to landslides. Due to the accumulation of debris, the water level of Hiroshima has increased greatly, after which people have been asked to go to the safe place.
Prime Minister Shinzo AB has announced a $ 315 million (about Rs 21,000 crore) funding for the worst floods of 36 years and 63 million dollars (about Rs 4334 crore) for infrastructure. The government has given its assurance of increase in the budget, if needed.
# Japan
# rescue worker
# Japan flood
# rain
International Report
Vishal Singh
International Report
Total 476 views
Japan: 155 deaths so far from the flood, rescue workers searching for victims from home
How to connect iOS7+ device to Apple TV?
Branching in #C : concept of If and their uses in programs (part 1) (module-19)
Flying car can you imagine that!!
How to disclose a Fake Facebook Account?
Random access memory (RAM) : Types and uses (module 32)
Government will take action against more than two lakh companies who hide financial information
What are Scrollbars?
How to Change the Language on Windows Computer?
Postmodern meeting of PM Modi will be held with Putin after Chinfing, Russia will go on May 21.
Who stole the show at 91st Oscars?
What is HTML Web Storage?
f
t
g
r